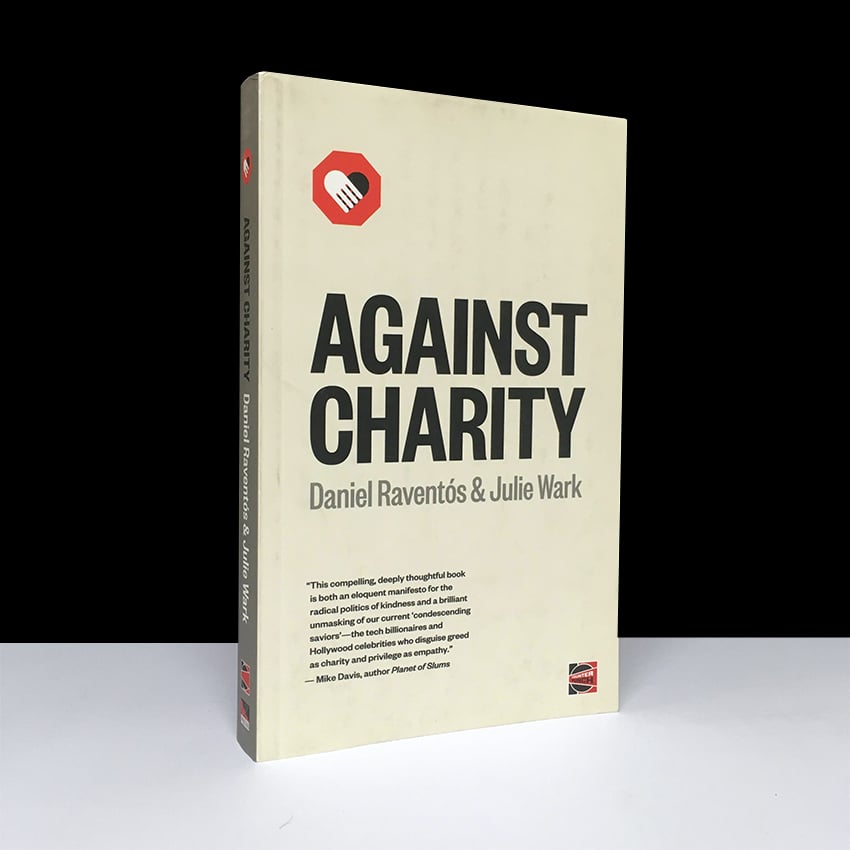 Charity is not a gift. Gift-giving implies reciprocity, an ongoing relationship. When requital is impossible, the act of giving remains outside mutual ties and charity becomes yet another manifestation of class structure, a sterile one-way act upholding the status quo.

Vacuuming up all the profits thanks to a weak labor movement, lower taxes, and tax havens (thanks, lobbyists and loathsome politicians!), the global elite then turn around and remake the world in their own image with charitable donations that speak more of mean-spiritedness than generosity. Postmodern versions of nineteenth-century charity aim to keep wealth and power in a few hands, mocking our desire for greater income equality.

Daniel Raventós and Julie Wark argue for an unconditional universal basic income above the poverty line and paid for by progressive taxation to both eradicate poverty and empower recipients—the result being the human right of material existence. The burning issue is not charity but justice.

Daniel Raventós is the author of Basic Income: The Material Conditions of Freedom. He is on the editorial board of the international political review Sin Permiso.

Julie Wark, the author of The Human Rights Manifesto, is on the editorial board of Sin Permiso, and lives in Barcelona.

We Will Not Cancel Us: And Other Dreams of Transformative Justice
£5.00
ABOLISHING THE POLICE
£8.00
Augmented Exploitation : Artificial Intelligence, Automation and Work
£19.99
This One Wild and Precious Life : The Path Back to Connection in a Fractured World
£20.00
the Art of Cruelty
£12.99
Capital Hates Everyone : Fascism or Revolution
£12.99
Sexuality, Disability, and Aging : Queer Temporalities of the Phallus
£18.99
¡Comrades! Portraits from the Spanish Civil War
£12.99
Antifascism, Sports, Sobriety : Forging a Militant Working-Class Culture
£13.99
Carceral Capitalism
£11.99
Human Rights and The Care of The Self
£20.99
A Survival Guide to the Misinformation Age : Scientific Habits of Mind
£18.99
Postcapitalist Desire: The Final Lectures
£12.99
Reasons in Revolt: Marxism Philosophy and Modern Science
£14.99
Lean Out
£8.99
Psycho-Logical: Why Mental Health Goes Wrong and How to Make Sense of It
£9.99
Whipping Girl: A Transsexual Woman on Sexism and the Scapegoating of Femininity
£15.99
The Art of Noticing: Rediscovering What Really Matters to You
£12.99
Limits: Why Malthus Was Wrong and Why Environmentalists Should Care
£10.99
Against The Law
£9.99
The Unsettling of Europe : The Great Migration, 1945 to the Present
£12.99
When The Sun Bursts: The Enigma of Schizophrenia
£12.99
Sound System : The Political Power of Music
£12.99
Men Explain Things to Me : And Other Essays
£12.99
This Is Not a Program
£12.99
The Mother of All Questions : Further Feminisms
£12.99
Whose Story Is This? Old Conflicts, New Chapters
£12.99
The Freedom to Be Free
£5.99
Deschooling Society
£8.95
Blueberries: Essays Concerning Understanding
£9.99
Begin Again: James Baldwins America and it´s Urgent Lessons for Today
£16.99
Red Star Over The Third World
£11.99
Economic Science Fictions
£17.99
Mask Off: Masculinity Redefined
£9.99
The Brutish Museums: The Benin Bronzes, Colonial Violence and Cultural Restitution
£18.99
The Shock of The Anthropocene
£11.99
Organizing for Autonomy : History, Theory, and Strategy for Collective Liberation
£14.99
Designing Disorder: Experiments and Disruptions in The City
£14.99
Making Abolitionist Worlds: Proposals for a World on Fire
£14.99
Pedagogy of The Oppressed
£9.99
The Wealth of (Some) Nations
£17.99
Naija Marxism
£9.99
Strangers: Essays on The Human and Nonhuman
£12.99
Whites, Jews and Us
£11.99
Comrade
£14.99
Entreprecariat: Everyone is an entrepreneur. Nobody is safe.
£22.00
China Goes Green : Coercive Environmentalism for a Troubled Planet
£15.99
Delirium and Resistance : Activist Art and the Crisis of Capitalism
£19.99
Judaism and Modernity
£9.99
feeding Britain: Our Food Problems and How to Fix Them
£12.99
Black Marxism: The Making of the Black Radical Tradition
£12.99
A Field Guide to Getting Lost
£9.99
Thin Places
£14.99
Paths to Prison - On the Architecture of Carcerality
£16.99
Aids : Don't Die of Prejudice
£14.99
The Social Photo : On Photography and Social Media
£8.99
The Islamophobia Industry: How the Right Manufactures Hatred of Muslims
£8.50
Art and Production
£8.50
Cults, Martyrs and Good Samaritans Religion in Contemporary English Political Discourse
£8.50
Resist the Punitive State: Grassroots Struggles Across Welfare, Housing, Education and Prisons
£8.50
Skint Estate : Notes from the Poverty Line
£9.99
Nomadic Theory : The Portable Rosi Braidotti
£28.00
Inventing Human Rights: A History
£12.99
Without a Net: The Female Experience of Growing Up Working Class
£11.99
Split: Class Divides Uncovered
£9.99
Decarcerating Disability: Deinstitutionalization and Prison Abolition
£23.99
Sensoria : Thinkers for the Twentieth-First Century
£16.99
Why Work? Arguments for The Leisure Society
£16.99
The People's Republic Of Neverland : The Child versus the State
£17.99
Raising Free People : Unschooling as Liberation and Healing Work
£14.99
The Anti-Capitalist Chronicles
£14.99
Direct Action & Sabotage: Three Classic IWW Pamphlets from the 1910s
£13.99
Breathing : Chaos and Poetry
£11.99
The Administration of Fear
£11.99
Teaching Resistance: Radicals, Revolutionaries, and Cultural Subversives in the Classroom
£20.99
An Artificial Revolution : On Power, Politics and AI
£7.99
Aphro-ism: Essays on Pop Culture, Feminism, and Black Veganism from Two Sisters
£17.99
Pornotopia : An Essay on Playboy's Architecture and Biopolitics
£22.00
What's Wrong with Rights? : Social Movements, Law and Liberal Imaginations
£19.99
The War on Drugs and the Global Colour Line
£18.99
In Defense of Housing : The Politics of Crisis
£16.99
Being Numerous : Essays on Non-Fascist Life
£12.99
The Slow Burning Fuse : The Lost History of the British Anarchists
£23.99
Fully Automated Luxury Communism : A Manifesto
£9.99
Wobblies of The World
£15.00
For a Politics of the Common Good
£9.99
Not As Nature Intended
£10.99
Is Racism an Environmental Threat?
£9.99
Wanderlust : A History of Walking
£9.99
On The Suffering Of The World
£10.99
On Immunity : An Inoculation
£8.99
Fascism and Democracy
£1.99
Between Light and Storm : How We Live With Other Species
£20.00
The Red In The Rainbow : Sexuality, Socialism & LGBT Liberation
£7.99
Automation and the Future of Work
£12.99
Class War : The Privatization of Childhood
£16.99
The Faraway Nearby
£9.99
Hydroplutonic Kernow
£15.99
Image for PostCapitalism : A Guide to Our Future
£9.99
Stop, Thief! : The Commons, Enclosures, And Resistance
£19.99
Disabled Futures
£22.99
Letters From London
£10.99
Exploring Degrowth: A Critical Guide
£16.99
Animals Like Us
£15.99
Abolition Democracy
£10.99
The Care Manifesto. The Politics of Interdependence
£8.99
Feminist City
£12.99
Policing the Planet : Why the Policing Crisis Led to Black Lives Matter
£15.99
The Meaning of Freedom : And Other Difficult Dialogues
£11.99
CORE A. Solution 264–274 Drill Nation
£13.00
Storming the Gates of Paradise: Landscapes for Politics
£21.00
Diagrams Of Power
£24.00
Sober Living for the Revolution
£20.00