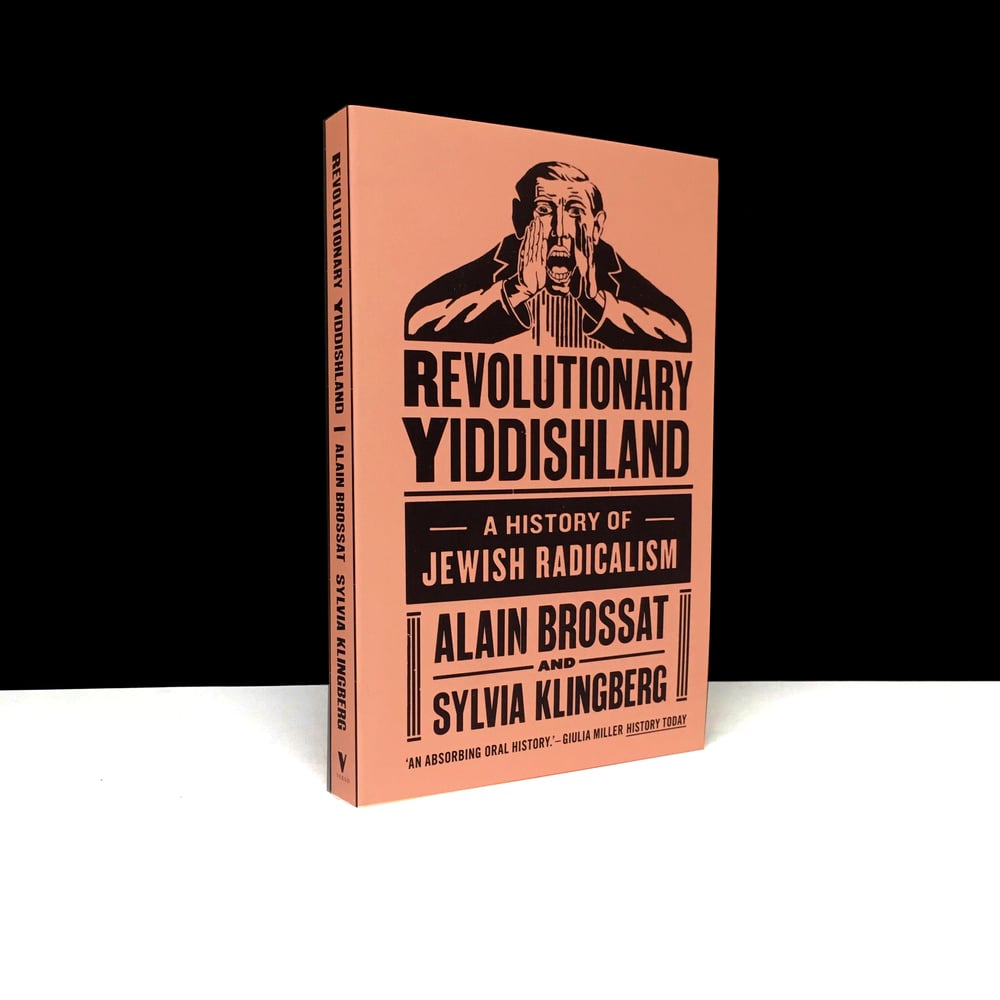 Jewish radicals manned the barricades on the avenues of Petrograd and the alleys of the Warsaw ghetto; they were in the vanguard of those resisting Franco and the Nazis. They originated in Yiddishland, a vast expanse of Eastern Europe that, before the Holocaust, ran from the Baltic Sea to the western edge of Russia and incorporated hundreds of Jewish communities with a combined population of some 11 million people. Within this territory, revolutionaries arose from the Jewish misery of Eastern and Central Europe; they were raised in the fear of God and taught to respect religious tradition, but were caught up in the great current of revolutionary utopian thinking.

Socialists, Communists, Bundists, Zionists, Trotskyists, manual workers and intellectuals, they embodied the multifarious activity and radicalism of a Jewish working class that glimpsed the Messiah in the folds of the red flag. Today, the world from which they came has disappeared, dismantled and destroyed by the Nazi genocide. After this irremediable break, there remain only survivors, and the work of memory for red Yiddishland.

This book traces the struggles of these militants, their singular trajectories, their oscillation between great hope and doubt, their lost illusions-a red and Jewish gaze on the history of the twentieth century.

Twitter and Tear Gas : The Power and Fragility of Networked Protest
£10.99
Fighting Fascist Spain : Worker Protest from the Printing Press
£20.99
Story Of The Iron Column : Militant Anarchism in the Spanish Civil War
£13.00
ABOLISHING THE POLICE
£8.00
Staying Power: The History of Black People in Britain
£16.99
Anarchism and It's Aspirations
£9.00
Antifascism, Sports, Sobriety : Forging a Militant Working-Class Culture
£13.99
Human Rights and The Care of The Self
£20.99
Marx And Nature : A Red Green Perspective
£14.99
Reasons in Revolt: Marxism Philosophy and Modern Science
£14.99
School: A Recent History of Self-organized Art Education
£21.75
Moving Against the System: The 1968 Congress of Black Writers and the Making of Global Consciousnes
£17.99
Organizing for Autonomy : History, Theory, and Strategy for Collective Liberation
£14.99
Here to Stay, Here to Fight: A Race Today Anthology
£15.99
Witchcraft and The Gay Counterculture
£12.00
Naija Marxism
£9.99
Savage Messiah
£16.99
Care Work : Dreaming Disability Justice
£13.99
What About Activism?
£17.95
THE CNT IN THE SPANISH REVOLUTION. VOLUME 1
£19.99
Mutual Aid : Building Solidarity During This Crisis (and the next)
£8.99
Anarchists Never Surrender: Essays, Polemics, and Correspondence on Anarchism, 1908-1938
£17.99
Racism as Zoological Witchcraft : A Guide for Getting out
£17.99
In the Name of ❤: Who Claims Love?
£12.99
Wageless Life : A Manifesto for a Future beyond Capitalism
£7.99
How To Do Nothing : Resisting the Attention Economy
£12.99
How to Kill a City: Gentrification, Inequality, and the Fight for the Neighborhood
£13.99
Grand Union: Accidental Anarchists or Downtown Dance 1970-76
£20.50
How to Blow Up a Pipeline : Learning to Fight in a World on Fire
£10.99
Paths to Prison - On the Architecture of Carcerality
£16.99
Rosa Luxemburg and the Struggle for Democratic Renewal
£8.50
The Aesthetic Of Our Anger : Anarcho-Punk, Politics and Music
£17.95
Breaking the Spell: A History of Anarchist Filmmakers, Videotape Guerrillas, and Digital Ninjas
£22.99
Secrets of Creation
£9.99
The Day The Country Died : A History of Anarcho Punk 1980 to 1984
£21.99
Be Gay Do Crime
£7.00
Raising Free People : Unschooling as Liberation and Healing Work
£14.99
The Anti-Capitalist Chronicles
£14.99
Demanding the Impossible: A History of Anarchism
£16.99
Direct Action & Sabotage: Three Classic IWW Pamphlets from the 1910s
£13.99
Occult Features of Anarchism
£13.99
The Story of Crass
£17.99
Teaching Resistance: Radicals, Revolutionaries, and Cultural Subversives in the Classroom
£20.99
A Billion Black Anthropocenes or None
£8.00
The Anarchist Encyclopedia
£18.50
X: Straight Edge And Radical Sobriety
£19.99
Angela Davis : Seize the Time
£39.95
Revolutions
£28.99
Being Numerous : Essays on Non-Fascist Life
£12.99
The Slow Burning Fuse : The Lost History of the British Anarchists
£23.99
The Anarchist Roots of Geography : Toward Spatial Emancipation
£20.99
Wobblies of The World
£15.00
Not As Nature Intended
£10.99
St. Pauli
£14.99
The Ecology Of Freedom: The Emergence and Dissolution of Hierarchy
£19.95
Class War : The Privatization of Childhood
£16.99
Listening to Noise and Silence : Toward a Philosophy of Sound Art
£24.99
Image for PostCapitalism : A Guide to Our Future
£9.99
Are Prisons Obsolete?
£10.99
Stop, Thief! : The Commons, Enclosures, And Resistance
£19.99
Animal Welfare Science, Husbandry and Ethics
£24.95
Letters From London
£10.99
The Uprising : On Poetry and Finance
£11.99
Two Cheers for Anarchism : Six Easy Pieces on Autonomy, Dignity, and Meaningful Work and Play
£14.99
The Meaning of Freedom : And Other Difficult Dialogues
£11.99
Futures of Black Radicalism
£19.99
Anthropology, Ecology, And Anarchism : A Brian Morris Reader
£21.99
Asia's Unknown Uprisings Vol.2
£25.99
Eco-Deconstruction: Derrida and Environmental Philosophy
£24.99
African Anarchism: The History of a Movement
£12.99
Marxist-Feminist Theories and Struggles Today : Essential writings on Intersectionality, Labour and
£21.99